Development of specific ligands for neuronal receptor is of use toward understanding the higher brain functions at a molecular level and clarifying the mechanism of neuronal diseases. In our laboratory, IKM–159 was developed in 2010 as an AMPA receptor-selective inhibitor whose structure had been inspired by marine-derived natural products.1 Following that study, MC–27 was synthesized as the IKM–159 analog and identified as a hypoactive compound.2

IKM–154 was also developed independently in our laboratory in 2010 as an artificial tricyclic glutamate analog. Contrary to the closely related, hypoactive IKM–159, IKM–154 had been thought to be excitatory, but there was still a possibility of inhibitory nature which was indicated by the previous in vivo assay by mice intracerebroventricular injection.3

We, therefore, next studied to establish the synthetic route of racemic IKM–154 in large quantities for 1) re-examination of the in vivo assay to determine the activity, 2) further pharmacological studies, and 3) the structural biology.

Starting from tandem four-component coupling reaction, alkenylated oxanorbornene 3 was obtained in tens of gram quantities, after conjugate addition of 3–buten–1–oxide. Modified domino metathesis mediated by Zhan–1B catalyst in the presence of vinyl acetate proceeded quite smoothly to give rise to heterotricycle 4, via intermediary triene (structure not shown). According to the previous procedures, 2.8 mg of highly pure racemic IKM–154 was successfully synthesized after 6 steps, which exhibited hyperactivity upon mice intracerebroventricular injection. The present study, thus, showed that IKM–154 is hyperactive.

Asymmetric synthesis of IKM–154 was next attempted to determine the enantiomer responsible to the neuroactivity. We studied three chiral reagents for optical resolution of the intermediates in the racemate synthesis, and found that menthyl ester formation allowed to efficiently separate the diastereomers 6/6*, by using HPLC. Deprotection of the PMB group using CAN followed by final deprotection using 1 M LiOH gave both enantiomers of IKM–154 (2.6 mg and 0.9 mg). Biological evaluation of both enantiomers by in vivo on mice are in progress. 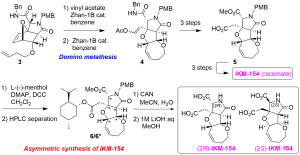