From our publications: Total Synthesis of the Proposed Structure for Protoaculeine B, a Polycationic Marine Sponge Metabolite, with a Homogeneous Long-Chain Polyamine (10.1021/acs.jnatprod.0c00761)

Title: Total Synthesis of the Proposed Structure for Protoaculeine B, a Polycationic Marine Sponge Metabolite, with a Homogeneous Long-Chain Polyamine 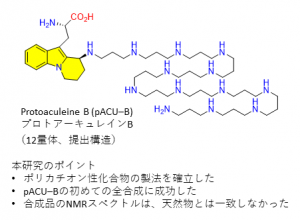 Aculeines (ACUs) A-C are the first example of peptides post-translationally modified by long-chain polyamine (LCPA) except for silaffin. Toxicity of ACUs to various mammalian cells stems from their ability to disrupt cell membrane, based on the unique but unexplained interactions between ACUs and plasma membrane. To study the mechanism of action of ACUs in detail, we have been studying chemical synthesis of ACU-B, since natural ACUs are structurally heterogeneous at the LCPA moiety.

In this work, we achieved the first total synthesis of the proposed structure for protoaculeine B (pACU-B) which corresponds to the N-terminal amino acid residue of ACU-B.

We first attempted to establish procedures for synthesis of such highly hydrophilic and polycationic amino acids, by synthesizing the trimer polyamine analog of pACU-B. During the synthetic study, we encountered problems in reaction control, reaction monitoring, purification, and handling in the final deprotections. However, the problems were successfully solved to finally synthesize the trimer analog.

We then attempted total synthesis of the proposed structure for pACU-B bearing 12-mer LCPA, by sequential deprotections of the fully protected precursor. In addition to the tailored procedures thus established above, here, we discovered that the use of glassware for concentration caused adsorption of polyamines on the glass surface. Of interesting note, free LCPA from marine sponges or diatoms are known to promote the biomineralization of silica by interacting with silicate ions. After several experimentations, we found that polypropylene conical tube was useful to isolate the polycationic polyamines. Finally, the synthesis was achieved in 18% for 3 steps of deprotections. The NMR, mass spectra and chemical reactivity of the synthetic sample were, however, found to differ from those of natural pACU-B, by which we concluded that the originally reported structure requires a revision.

Because of the intriguing biological activity shown above, we are continuing the work toward the correct structure for pACU-B. The procedures established here for synthesis of highly hydrophilic and polycationic amino acid will be also useful not only for such ongoing studies, but also for other organic compounds with hydrophilic and/or polycationic properties.