From our publications: Menthyl esterification allows chiral resolution for the synthesis of artificial glutamate analogs 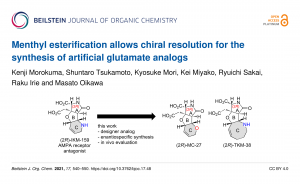 In this paper, we report an improved, shorter-step enantioselective synthesis and some structure-activity relationships (SAR) of IKM-159 analogs bearing six-membered oxacycle and eight-membered azacycle for the C-ring. The synthesis features chiral resolution of the carboxylic acid intermediate by esterification with L-menthol, followed by configurational analysis by NMR, conformational calculation, and X-ray crystallography. Starting from readily available oxanorbornene, optically pure (2R)-MC-27, (2R)-TKM-38, and the antipodes were enantiospecifically synthesized in total 8 steps for each.

The SAR data collected in this study are thus useful 1) for understanding the novel interactions between our ligands and the iGluR, and 2) for molecular design of the next generation ligand with high potency.